5 Thoughtful Resources to Help Your Leadership 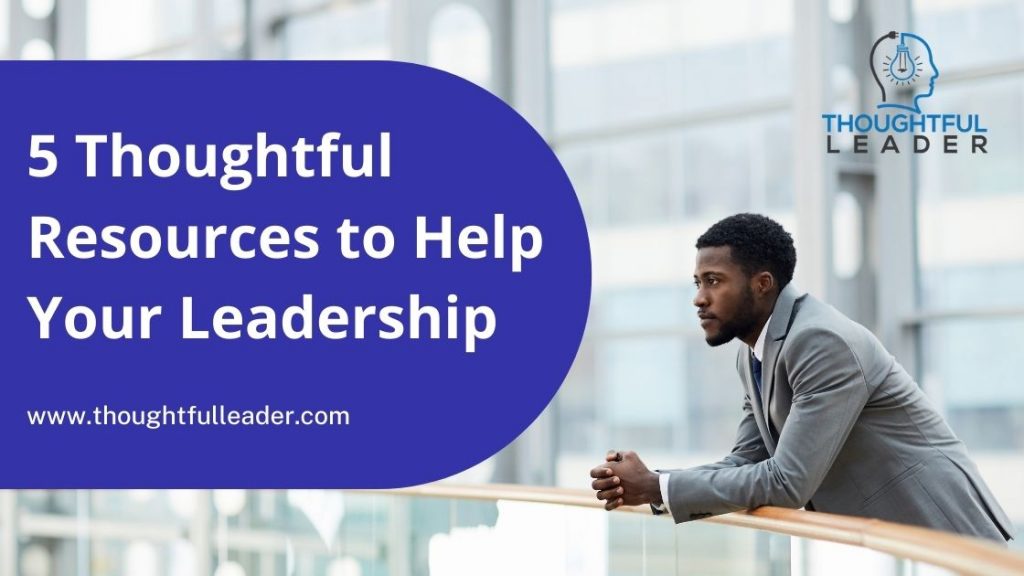 In this post I thought I’d bring together some simple and thoughtful resources including quotes, ideas and writing that I’ve collected over the years.

I’ve found all of these useful at some time or another to help with a challenging leadership situation or a dip in motivation. I did not create these, so I’ve referenced where they came from below and reproduced them here.

Hopefully they are helpful to you too, and may stimulate some further thought.

Let me know what you think in the comments!

This one comes from Seth Godin and is called “Everyone is Doing Their Best”.

“What if that’s not actually true? Perhaps it’s more useful to consider that in every moment, on every project, no one is actually doing their best.

Because there’s always a need to hold a little bit in reserve.

Because there are always competing priorities.

Because everyone has a noise in their head.

Because there’s fear, a hundred kinds of fear.

Because no one has actually done the lopsided work of 100% preparation and commitment, not for this precise moment.

I’m not doing my best and neither are you. Because we’re not optimized algorithms, we’re people.

Okay, now that we can see that no one is doing their best, what are our options?”

I like this one because it speaks to the often harsh reality and less to the idealistic “We’re all doing our best!”

It’s likely not true. At some point, we’re tired, have other priorities or simply lose focus. When we can keep this in mind when leading our people, we start to see situations differently.

What is going on for your team? How can you support them to get closer to their best, even if they don’t quite hit it all the time?

Everyone has their “stuff” going on.

Remain aware of this and you have a powerful ally in your corner: Empathy.

2. On Getting to the Point

The French Philosopher and Mathematician Blaise Pascal had this to say:

“I would have written you a shorter letter but I did not have the time”.

I once worked in a role where my manager would send long weekly emails containing all sorts of personal stories and assorted trivia. Sometimes at the bottom of the email, or hidden within it, were key work-related points they wanted to communicate.

As soon as I saw these emails, my eyes glazed over and my interest faded. Sometimes, I would be caught out by failing to spot the key points of the message (if I read it at all).

It’s easy to write or speak in long, rambling messages, because it requires no thought.

It’s a similar concept to someone who has no priorities, and tries to focus on everything. It’s easy, because you don’t have to make a hard choice about what to leave out.

The problem is, this has a magnifying effect on your people. Imagine your rambled message was read by 5, 10 or 20 people? That’s a lot of wasted time spent trying to unravel your message.

Being concise is a useful skill.

Learn More:  Are You Too Busy to Lead Effectively? 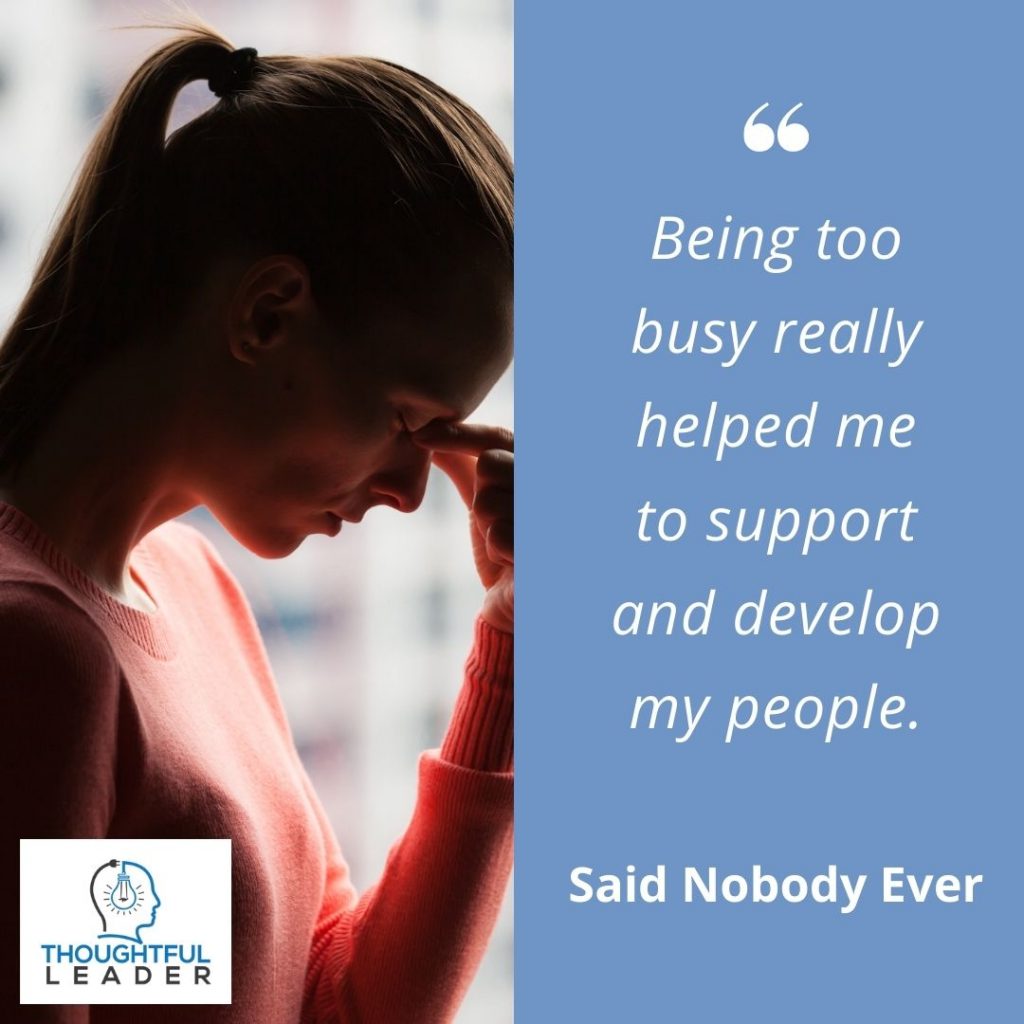 This one comes from Theodore Roosevelt and is a nice reminder for leaders who are pushing boundaries, making change and going through tough times. Note: I have modified the quote slightly to make it gender-neutral!

“It is not the critic who counts; not the person who points out how the strong person stumbles, or where the doer of deeds could have done them better.

The credit belongs to the person who is actually in the arena, whose face is marred by dust and sweat and blood; who strives valiantly;

who errs, who comes short again and again, because there is no effort without error and shortcoming; but who does actually strive to do the deeds;

who knows great enthusiasms, the great devotions; who spends themselves in a worthy cause; who at the best knows in the end the triumph of high achievement, and who at the worst, if they fail, at least fails while daring greatly, so that their place shall never be with those cold and timid souls who neither know victory nor defeat.”

My Takeaways from the Person in the Arena Quote

You’ll always have your critics. People who point at what you’re doing, and don’t like it.

Or, laugh at your attempts to make change when they’ve given up already.

Michael Jordan had a similar sentiment: “You miss 100% of the shots you don’t take.”

Remember when people are taking potshots at you, it doesn’t necessarily mean they’re justified or correct. They might just be scared, resistant, jealous or feeling threatened.

Better to try to do something, than to live in regret for never having taken the chance.

4. On Noticing the Positives

This next one would definitely not go down in history as a “leadership quote”, but nevertheless, I’ve found it extremely valuable.

It comes from French Artist Henri Matisse, and reads:

“There are always flowers, for those who want to see them.”

Have you noticed just how much negativity there is in the world?

Opening up your favourite news website, you’ll probably be assaulted with fearful, negative or critical articles.

Open up twitter and you’ll see greater atrocities, with people abusing each other left, right and centre. Then of course, there are Youtube comments which have a similar theme. 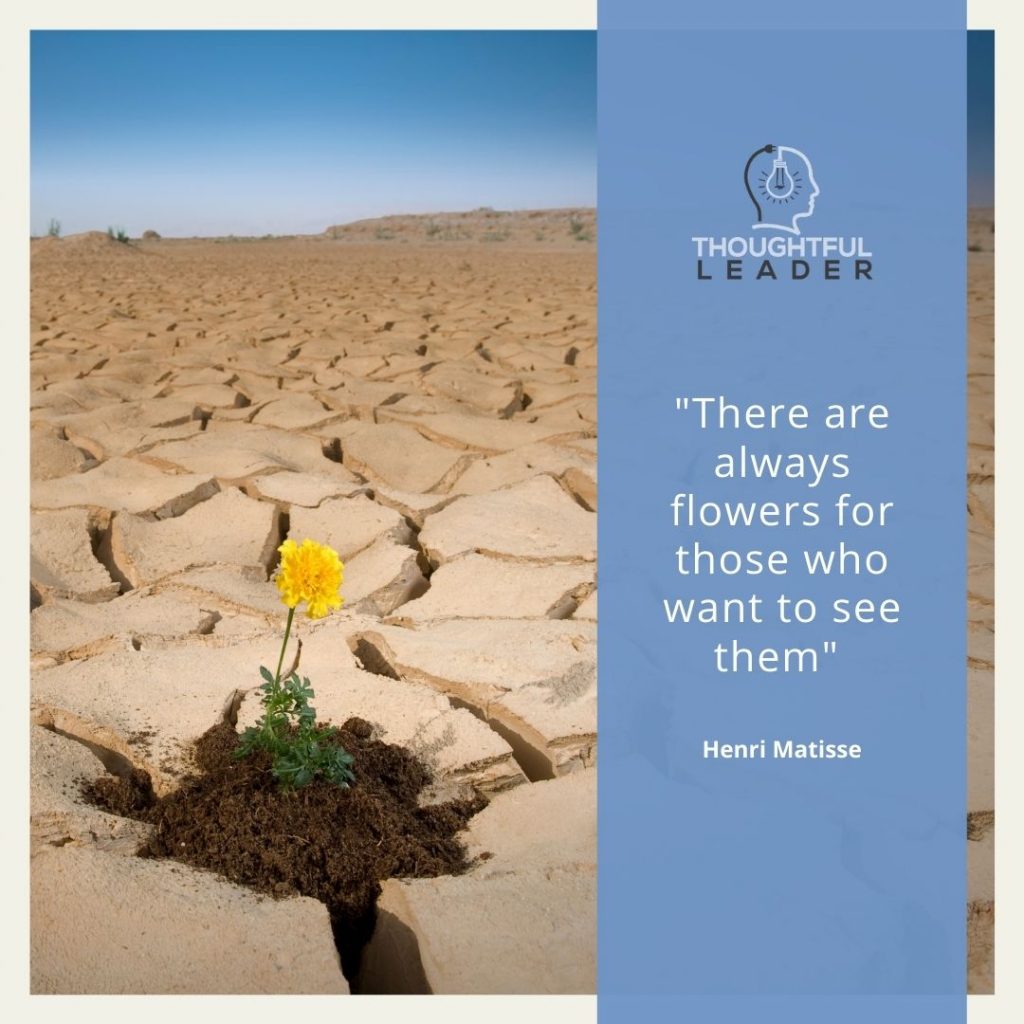 This quote reminds me that there are positive sides to life, if we take time to notice them.

I have a reminder that goes off on my phone 3 times per day that asks me “What did you enjoy recently?”

Sometimes, I need to search hard for something, but I always find it.

Get in the habit of noticing positives, and you’ll start to feel more positive. Practice and you’ll get better at it.

This last nugget comes from the book “Time to Think: Listening to Ignite the Human Mind”, by Nancy Kline.

I recommend this book to leaders who are interested in creating a better “thinking environment”.

That is, an environment where your people are able to think for themselves, and to think in a way that helps them overcome their challenges and achieve their goals.

In the book, Nancy writes:

“Every day the world pulls us down, shakes us up, slices into us, laughs at our attempts and belittles our triumphs.

We legitimately need to hear afresh every day a few things that are honestly good about us. Most important of all, these good things will help us keep thinking for ourselves with courage and clarity.

Surely that is a good enough reason to discard the negative norm culture that keeps you from saying what is good and turn to the person next to you with a reminder of their strengths.

Notice what is good and say it.

As with any force for lasting change, it is simple.”

Nancy also writes that her advice is to aim for a ratio of 5 positive to 1 negative interaction when it comes to relationships, whether it be in the workplace, or outside.

Appreciating Your People Isn’t That Hard

As with many things in leadership, it’s not rocket science. All we need is a little bit of intention. We need to take time to notice the good things our people are doing.

But the next step is one we often don’t take. We need to tell the person about it!

Giving praise can feel weirdly uncomfortable, especially in cultures where saying positive things feels like we’re making a big deal. But praise helps, so take the time and be genuine.

Fake praise doesn’t help anyone and may have the opposite effect.

Sometimes in my leadership roles, I’d leave a post-it note on the screen of a colleague or team member saying thanks for something they did. Often they really appreciated it, but it only took a few seconds of my time.

Years ago I used to read books by “The Sandman” who used to give profound, deadpan life advice on a radio station called Triple J.

That’s not very scientific, but I think there’s something in that, too.

What are some of your favourite poems, quotes or stories that help you in your leadership? Let me and all the other thoughtful leaders know in the comments!