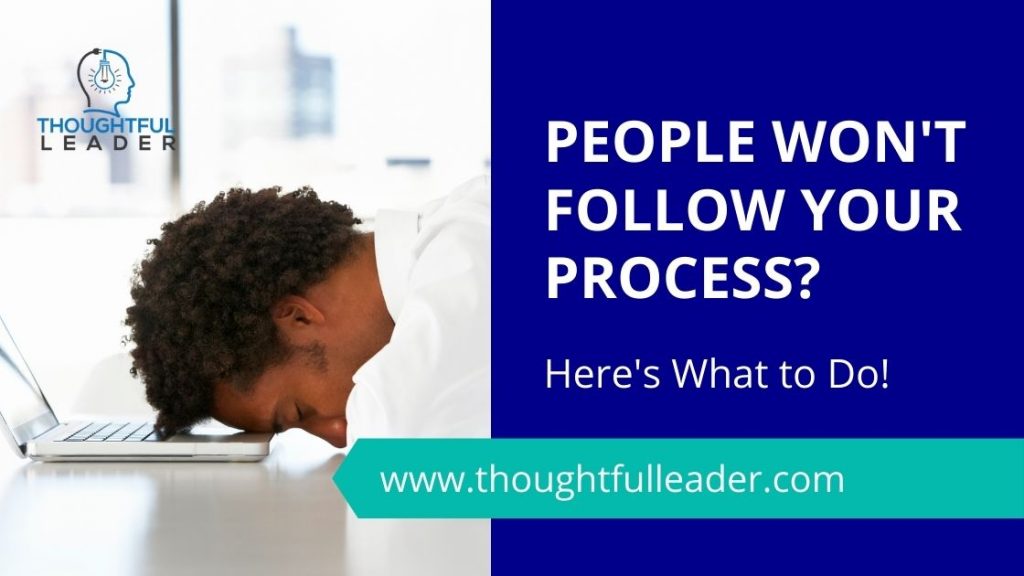 One of the useful actions you can take as a leader is to introduce structure into your team, in the form of clear processes. This seems like a great idea, but what if people won’t follow your process?

Having a clear set of processes in your team is beneficial because it provides rules to follow. However, many leaders introduce process as a way of fixing issues in their teams, but become frustrated when they don’t see dramatic improvements.

This is because introducing process won’t solve your people problems alone. For people to follow your process, the right motivations and behaviours need to be in place, too.

Perhaps you’ve introduced a process for other teams in your organisation to request work from your team. Or maybe it’s a process for your team to follow, so the work is done to the right level of quality.

Whatever it is, it’s time to make sure that the process you’ve worked hard to create can actually work.

If your people aren’t doing what you’d like, having a clear process is a good place to start. A process will help to set a clear expectation about what you need people to do.

However, this is only a starting point. It feels good to have a clear process to get work done properly. But process is useless when it isn’t followed.

Someone once said to me “People do the work, processes don’t”.

It took a while for that to sink in, but it’s true. We achieve results in teams because people complete work by following a process. The process doesn’t do the work by itself.

Of course, it you are running a process that is fully automated by computer systems, people aren’t doing the work. But if you’re having people problems, then your process probably isn’t fully automated!

Now, let’s take a look at some of the common reasons why people won’t follow your process. You’ve made the effort to introduce one, so let’s get the most out of it!

1. People Won’t Follow Your Process Because They Don’t Believe In It

Sometimes people don’t get on board with a new process because they are skeptical. They might not believe that following the process is actually better.

In other words, what was wrong with what they were doing before?

There are a few ways to address this challenge.

First, it’s useful to involve your people in the creation of the process itself. When people get a chance to contribute, there is a greater chance they will see the benefit and feel ownership, because they helped to create it.

If you don’t involve people, you’re just telling them what to do. When your people help you craft the process, they are helping you to create a better outcome.

Second, get clear on the why. Why does this process matter? Why is it better? What’s in it for your people?

Explaining why the process is important really helps gain buy-in. People can then connect the process to an outcome that matters to them.

If you are struggling to highlight the reasons why people should care, then there might be a problem with your approach. “Because I’m the boss and I said so” often doesn’t really cut it.

And third, measure and demonstrate the results. Can you prove that your process has improved anything? Or is it just a leap of faith?

Measuring the success of your process is important to build confidence in it. Maybe you can handle more customer requests than you used to. Perhaps your people are working less hours. Whatever it is, see if you can measure it, to see if it’s working.

Learn More:  Why You Need to Understand Your Team Process.

2. People Resist Your Process Because It Is Too Prescriptive

Have you ever been given a strict set of instructions to follow, where you can’t deviate from the script even a little?

If you’re a motivated, intelligent person, following a process like this can get boring. Really boring.

Autonomy is one of the most important aspects of job design and motivation. That is, being able to have some control over the way you do your work.

If your people aren’t feeling like they have control over the way they work, motivation will suffer.

When your process is too specific, people can get bored. Especially if you have people that are creative and like a little freedom.

Consider focusing your process on the critical aspects, and letting your people have a little flexibility with regard to the rest.

3. People Won’t Follow Your Process Because Nothing Is Forcing Them To

Sometimes people will continue doing what they’ve always done, because there is nothing stopping them!

In my experience, this happens for several reasons:

Processes often fail because nothing is forcing people to follow a new way of working.

In one example, I saw a leader try to put a new request process in place for their team. For people to request her team to complete a task, they needed to raise a ticket so it could be prioritised and placed in a queue.

This was a good step to try to stop her team from becoming overwhelmed. In most cases, it worked just fine. However, there was one instance where it broke down.

One of her team members was good friends with a manager outside the team. This manager would email her friend directly instead of putting any work into the queue. This means that the work wasn’t tracked, and there was no visibility.

In this case, the team leader had to do some stakeholder management, to make sure that her team member wasn’t allowing this shortcut to happen. And then, she needed to make sure the other manager was following the rules.

4. People Won’t Follow Your Process Because They Feel Threatened

Many leaders love introducing processes, because they create structure and control. However, it’s worth considering how your people feel about the new process too. 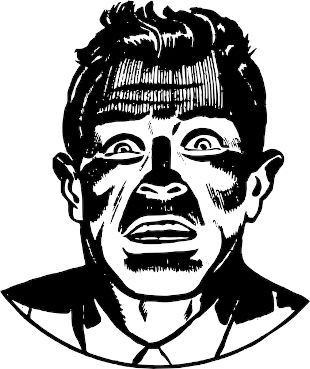 People may resist your fantastic new process if they feel threatened by it.

Even though you might think it’s a positive change, other people may not agree. Here are a few questions to consider when you’re introducing a new process.

The point here is not to stop you from introducing a better process. It’s to consider some of the potential factors which could have your people feeling threatened by it.

If you can develop some simple strategies to overcome these common fears, you’ll have a much better chance that people will follow your process.

Often, the starting point in addressing these concerns is a simple conversation. Especially if some of your people may have misconceptions about how the new process will affect them.

Learn More:  Don’t Have a Team Operating Model? Here’s Why You Need One.

The intention of this post is not to make you hesitate in making a positive change in your team. Continuous improvement is a good thing. We should always be striving to get better.

However, it’s important to be thoughtful when introducing a new process. If you want people to follow it, craft a strategy to help your team feel more at ease.

If you do this well, your team may even lead the way and be the champions for your new way of working!

Have you ever struggled with a team who won’t follow your process? What did you do about it? Let me and all the other thoughtful leaders know in the comments below!