Are You Holding Yourself Back? Spot the Signs 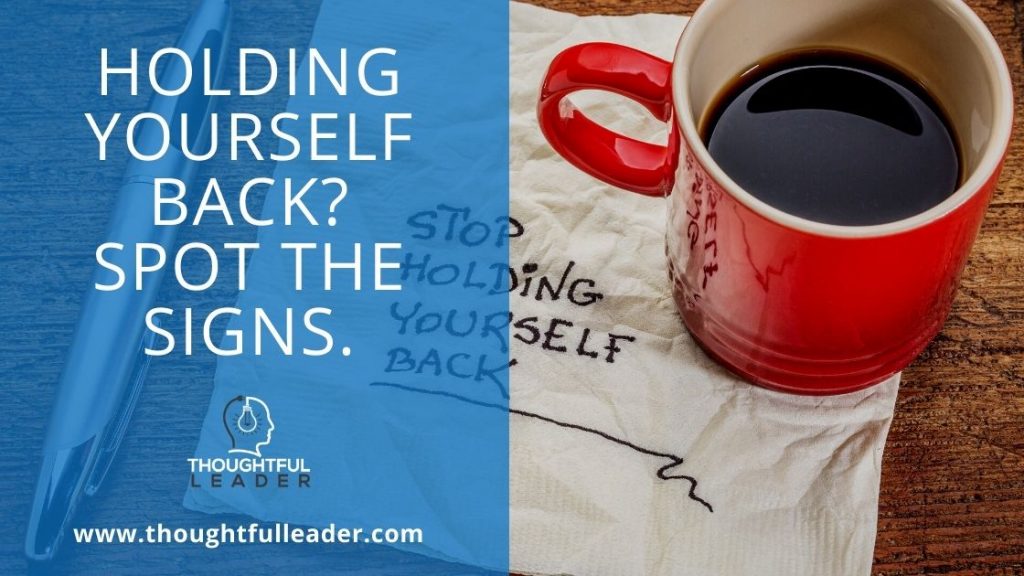 A common theme I see amongst thoughtful leaders is that they can have a tendency to get in their own way. Could it be that you are holding yourself back from achieving the results you want?

Hopefully you aren’t someone who will fall into any of these traps. But if you are holding yourself back from achieving the things you want, then let’s see if we can do something about it.

If you’re holding yourself back, it’s most likely unintentional. It’s more likely to be because your belief system is not helping you.

Thoughtful leaders are naturally introspective, and may have a tendency to shy away from confrontation. They may stay silent, while other more brash leaders speak up for what they want.

Thoughtful leaders can also become stuck in their own heads. They might believe some of the stories that their mind tells them. Once again, this can sometimes result in a lack of action.

Thoughtful leaders are also very people-focused. They think hard about the impact they have on the people around them. This is a great quality and why it can be so great to work for a thoughtful leader!

However, this people-focused quality might also cause you to hold yourself back, for fear of upsetting somebody, even if it’s for the greater good of the team or organisation.

Learn More:  Thoughtful Leader Podcast #24: Why You Need to Speak Up At Work.

How You Could Be Holding Yourself Back

Whatever you want to call them, here are some of the common ways that thoughtful leaders hold themselves back.

1. Focusing On What You Can’t Control

The best leaders I’ve worked with tend to take action and stay focused, even in difficult work environments. After all, it’s common to find things like politics and difficult stakeholders even in the most successful organisations.

That’s why it’s so critical to be able to navigate your workplace environment, and be able to feel good at the same time.

If you set your sights too high, with your goals too large, you may feel defeated because you’re not able to see results. You’ll likely feel like you’re not making a difference at all.

Once a leader feels powerless, helpless and useless, they are more likely to sit back and observe, rather than take action. This is what we want to avoid!

Understand the Sphere of Control

The Sphere of Control is a useful model to help us feel more competent and in control of our situation. You can see it visualised as three circles. 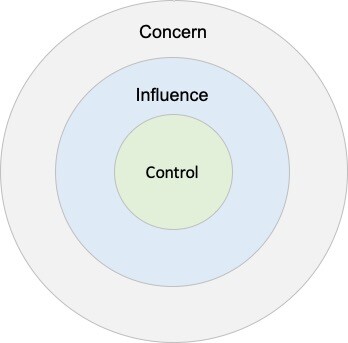 Your Sphere of Concern includes aspects of your environment that you are concerned about or interested in, but cannot influence or control directly.

The Sphere of Influence covers aspects that you can have some influence over, but cannot directly control or make decisions about.

For example, you might be able to influence the approach taken by your manager, but you won’t be able to make decisions for them.

Your Sphere of Control includes aspects that you can directly make decisions about, or take action on.

For example, allocating work within your team is likely to be within your Sphere of Control, because you can make the decision yourself.

Instead, Focus on the What You Can Control

The more you focus on what you can control or at least influence, the more satisfied you will feel. You’ll be more likely to take action and complete tasks that are within your control.

If your goal is too big, break it down. You’ll no doubt be able to take control of smaller parts of the overall objective, and you can try to influence the rest.

You’ll start to build momentum as you make progress, and you’ll build a sense of self-efficacy. That is, you’ll feel like when you try to achieve something, you’re likely to succeed.

All of these aspects combined mean that you’re less likely to stand in your own way and hold yourself back.

2. You Are Holding Yourself Back When You Make Assumptions

As part of everyday life we make assumptions, because it’s quicker to work that way. We assume that if we take the train to work, it will get us there on time.

We assume that when we drop the kids off at school, they’ll be well looked after.

If we didn’t make assumptions like this, we would likely be a nervous wreck most of the time, worrying about what might go wrong!

However, many leaders make assumptions at work that shape their behaviour in a negative way.

Here are some examples:

You can probably see the common thread in these examples.

The assumptions stop us from taking action, because we assume we know the answer already. This means we hold ourselves back by never even asking the question!

What Message Are You Sending to the Universe? 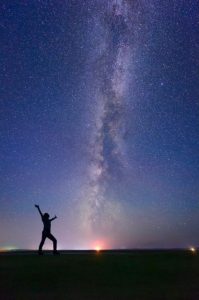 It might seem like a very new age concept, but it’s important to think about what message you’re sending out to the universe.

This isn’t some magical, mystical phenomenon. It’s about showing your intent to the world around you.

If you never take action because you assume you know the outcome, you’re sending a message that you don’t care, or the issue doesn’t matter to you.

But taking action shows you mean business. It means that others will see what you stand for, and they may just get on board if you actually try.

Learn More:  Do You Have a Victim Leadership Mentality?

3. You Are Holding Yourself Back When You Focus On the Consequences More Than the Goal

One of the questions I like to ask my coaching clients is:

“What would you do if there were no consequences?”

Now we all know that in reality, there are consequences for our actions. But this question helps you to think differently about your situation.

Many leaders hold themselves back by focusing too much on the consequences of taking action, instead of the benefits of the action that they are taking.

Sometimes it’s liberating to think about what you would do if there were no consequences.

In many cases, the answer to the question is obvious and straight forward, because we instinctively know the right action to take.

For example, you may be dwelling on the potential problems that might arise if you initiate a difficult conversation with your boss.

Are you holding yourself back by focusing too much on the consequences that may occur if you take action?

Once you know what you should do, you can start to devise some strategies to overcome the potential problems that might happen afterwards.

This will help you to make progress, and keep your momentum up.

After all, there is no point worrying about failure if you never even try to succeed.

4. You Hold Yourself Back When You Put Yourself Last

Many thoughtful leaders focus on everyone else first, and put themselves last. This can even lead to feelings of guilt if we do something positive for ourselves.

We are so focused on doing the right thing by others, that we forget about ourselves.

This becomes a problem when it stops us from taking opportunities that could improve our careers, or just our work situation and wellbeing in general.

However, often the way to show up as a good leader is to put yourself first. You’re more likely to feel good about yourself and have a positive mindset.

Putting yourself last leaves you at risk of disappointment, burnout and lacking motivation. These are not good attributes when you’re trying to support your people.

Learn More:  How to Put Yourself First: A Guide For Leaders.

Getting in your own way is a common affliction of thoughtful leaders, but you don’t need to let it happen to you.

Instead of holding yourself back, see if you can take positive action to move you forward and be the best leader you can be for your people.

Are you holding yourself back in your leadership? Or have you seen others doing it? Tell me and all the thoughtful leaders your story in the comments below!