How a Chaotic Work Environment Is Hurting Your Team 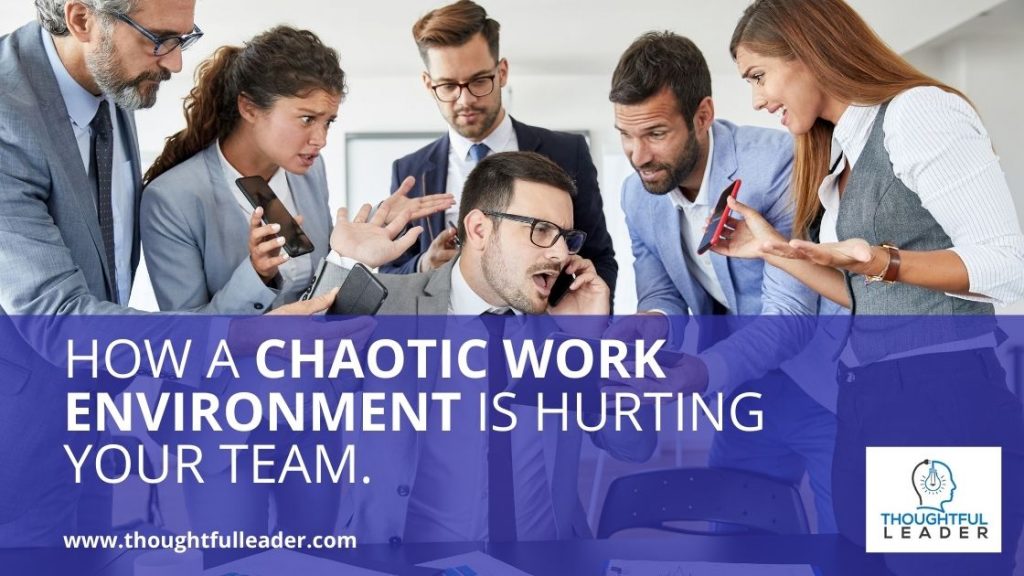 Ever worked in a chaotic work environment? Sometimes these are also described as “fast-paced”.

I’ve worked in a few work environments like this, and for me, they were extremely unpleasant.

I like to prepare, prioritise and be able to plan ahead, so these “fast-paced” work environments are a little bit like my kryptonite (yes, I’m superman in this example).

However, while I was working in these chaotic work environments, I noticed some worrying trends (apart from my own stress at being unable to prepare or plan effectively).

Leadership suffered, and not because all the people were necessarily terrible leaders. It’s because the environment was setting them up for failure.

What Is a Chaotic Work Environment?

A chaotic work environment, in my experience, has the following characteristics:

As with many things in life, there is no black or white. No workplace is completely chaotic, or completely strategic. The amount of chaos present in a working environment lies on a spectrum, from perfectly organised to ridiculously chaotic.

No workplace is perfect, and even the most organised and strategic workplaces will experience some sort of chaos. The idea is to try to move more towards the strategic and structured end of the spectrum!

Now, you might wonder who in their right mind would put up with a chaotic work environment. Why wouldn’t people step up and fix these issues, creating a more productive setting?

My answer to this question is that for some people, working in a chaotic work environment is *easier*.

Sound silly? Let’s take a look at why. 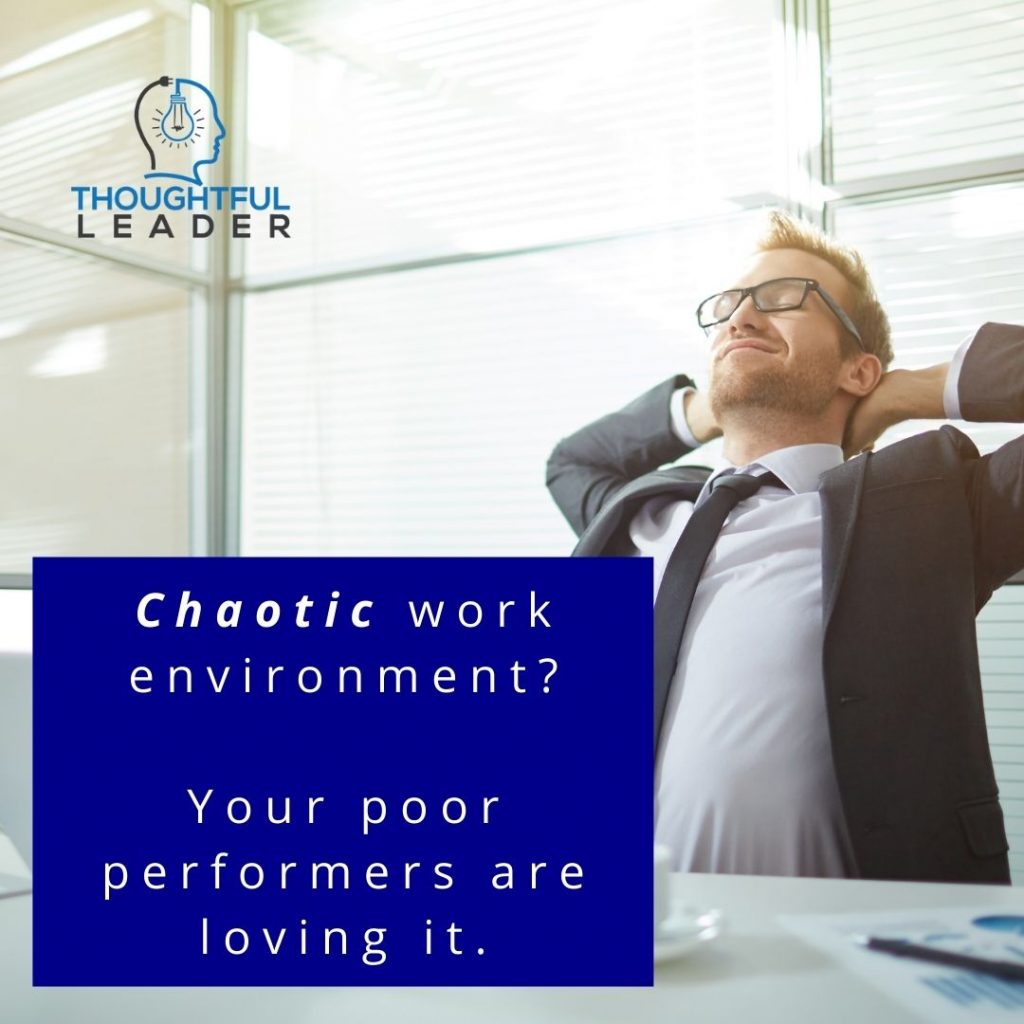 Why Working in a Chaotic Work Environment Can Be Easier

It may sound counterintuitive, but I’ve found that for some people, working in a chaotic environment can be easy.

Firstly, there is no need to make hard choices about priorities. The people who shout loudest win. The latest urgent request is done first. Everything is important.

It’s easy when you don’t need to make any choices about what’s important. You do everything, you never turn a request down, and you work on the most “urgent” thing first.

There is also no need to push back on anything. The rules of the game are set, and simple. Most urgent wins. This means there are very few hard conversations to push back on incoming requests. Instead, people agree to everything. The only hard conversations happen when something goes wrong, or isn’t finished on time.

These are easier, because there is no discretion, no choice. It’s just about owning up to what happened.

When leaders aren’t forced to make choices about what is important, sometimes it can feel better because if something goes wrong, it’s not their fault.

But if a leader needs to make a hard choice – to say “No”, to turn something down, or to say “That’s not important right now”, then it becomes their fault if it’s a bad call.

In a chaotic work environment, being constantly busy can feel comforting. It feels productive, because you’re working busily all day.

But are you really being effective? Maybe not.

How a Chaotic Work Environment Is Damaging You and Your Team

We’ve looked a little at the problems of a chaotic work environment. But the real casualties here are the people working inside.

There is long-term damage that can result from working in these types of environments. Once this type of chaotic culture starts to build, it’s hard to reverse.

Here are my top three ways that a chaotic work environment will damage your team, your organisation and your leadership.

Accountability is critical in any workplace, but it’s much harder when you’re surrounded by chaos.

The foundation of accountability is being able to set clear expectations. Once this is done, then it’s about holding people to what was agreed.

The problem with a chaotic work environment is that they are reactive. You may agree to something one day, and then find that something urgent has come in, trumping what you were working on.

Constant chopping and changing will mean that accountability suffers. People have an easy way out, because they can say they didn’t deliver because another urgent priority came up.

People will also be hesitant to step up and take ownership of a project or initiative, because they know how often priorities change or things go wrong.

It’s hard to punish people for missing when they are trying to hit a moving target.

Learn More: Thoughtful Leader Podcast #161: How to Improve Accountability In Your Team.

What happens when people make plans, but they are always changing?

They eventually become accustomed to not finishing what they started.

They have a task list that is never completed, because new urgent issues arise that take priority over everything else.

Over time, people get used to living with tasks that aren’t complete. Instead of striving harder to finish what they started, they become resigned to leaving work undone.

After all, they know that even if they try to plan, their plans will be dashed soon enough. 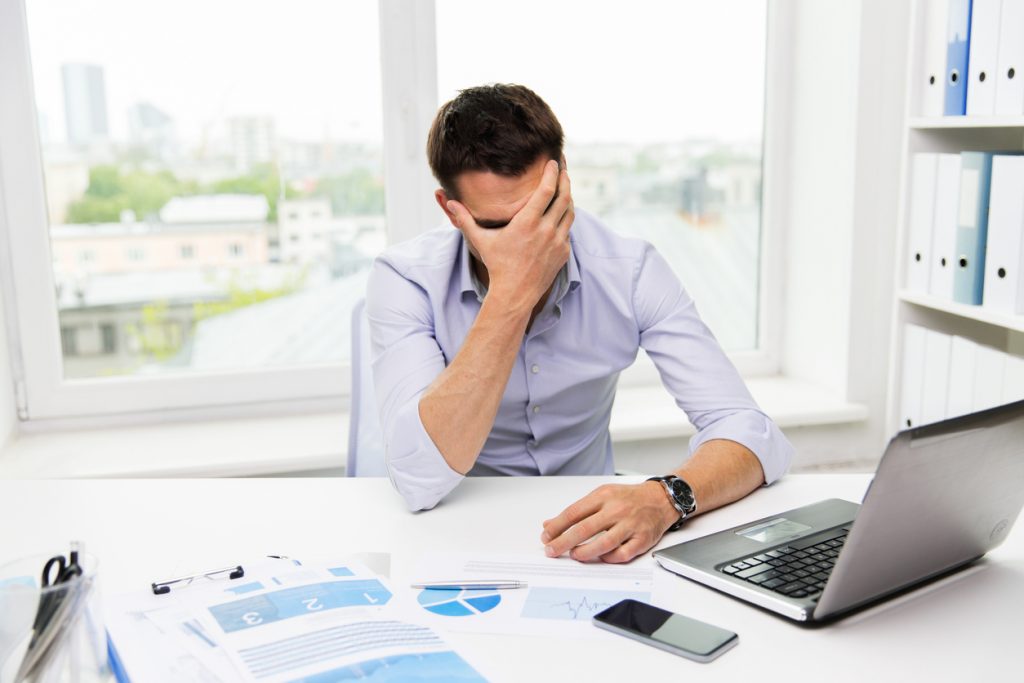 It’s in these environments where I’ve noticed a strange thing.

People say they are busy all day and have so much to do. And when the work isn’t finished, people still go home on time.

Normally, you’d think people would strive to finish their work. Instead, people know they might as well go home, because the work will never be finished anyway.

People start to switch from focusing on completing tasks, to a focus on completing hours. It can be a struggle to motivate people in a clock-watching culture.

In a “whoever shouts loudest wins” environment, it’s difficult to respect priorities.

Even if you spend effort declaring your top priorities, these are quickly forgotten when a senior leader starts yelling about their own top initiative.

“Urgent” issues start to derail any priority you try to set. Over time, this can result in a work environment where priorities aren’t valued.

Priorities can only be useful when people stick to them. In a chaotic work environment, priorities are changed so often that they become ineffective as a tool for focusing effort.

Learn More:  Taking On Too Much? Here’s Why.

How to Introduce Structure to Calm the Chaos

If you find yourself constantly buffeted by the strong winds of a turbulent work environment, you’re not alone.

But what can you do about it, especially if you’re just one leader inside the storm?

It’s not easy, because you’ll be pushing against the current culture. This takes persistence, patience and courage.

Here are a few ideas to help you get started:

It won’t be easy, but you’ll need to be committed if you’re going to make a change.

Saying “No” Is Your Biggest Weapon Against Chaos

In chaotic workplaces, people have usually become accustomed to saying “Yes” most of the time.

“Yes” to the customer who demands lots of work at the last minute.

Saying “Yes” to the CEO who demands that their pet project must be done right now, when it was never on the organisation’s priority list.

“Yes” to the boss who asks you to do something that you know isn’t the right thing. 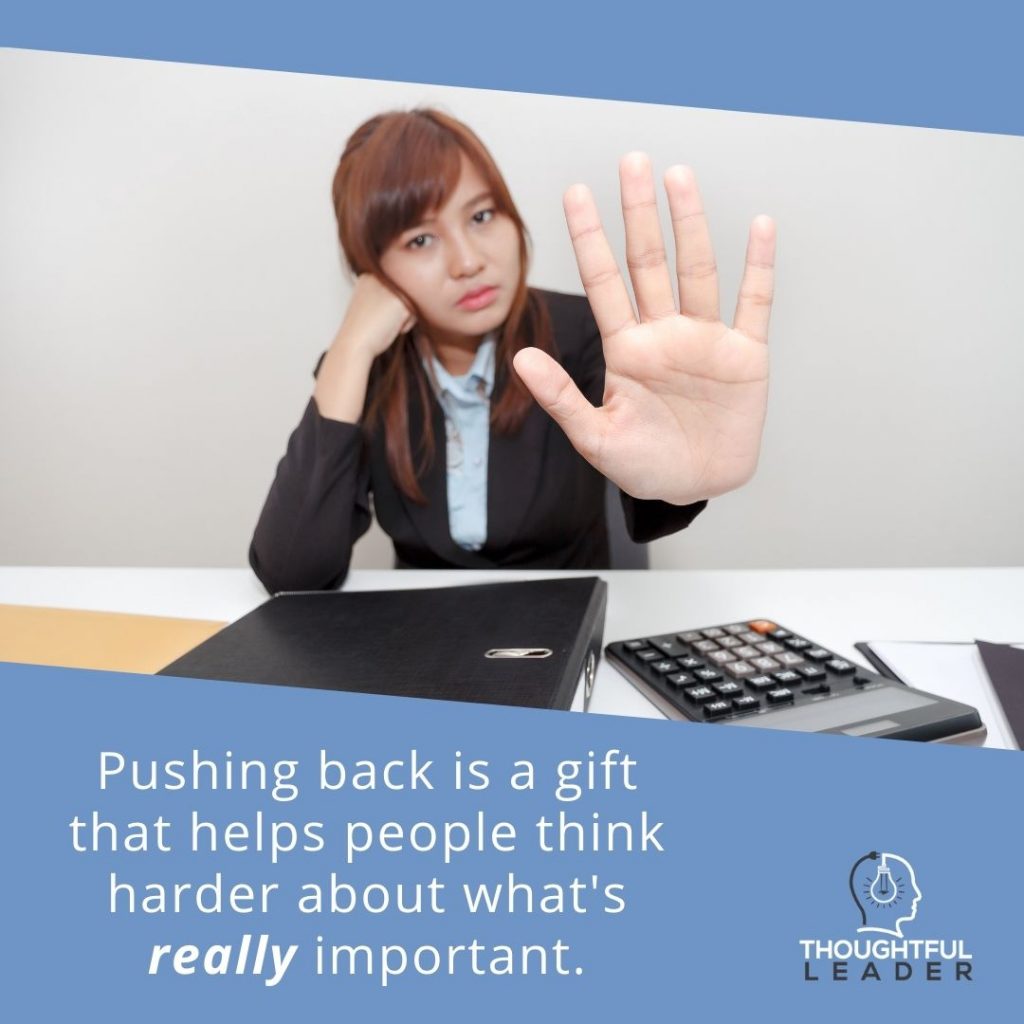 An organisation that never learns to push back and say “No” will never be able to be strategic.

They’ll simply be working on the latest urgent priority from somebody else, rather than setting their own direction.

Saying “No” is your best friend to prevent a chaotic work environment. I’ve left some tools to help you do that here:

If you’re sick of spending your days in a chaotic work environment, you need to make a change.

The best time to make a change was long ago.

Have you ever worked in a chaotic work environment? How did you survive and were you able to improve it? Let me and all the thoughtful leaders know in the comments!