Want to Build Empathy? Use the Iceberg Model 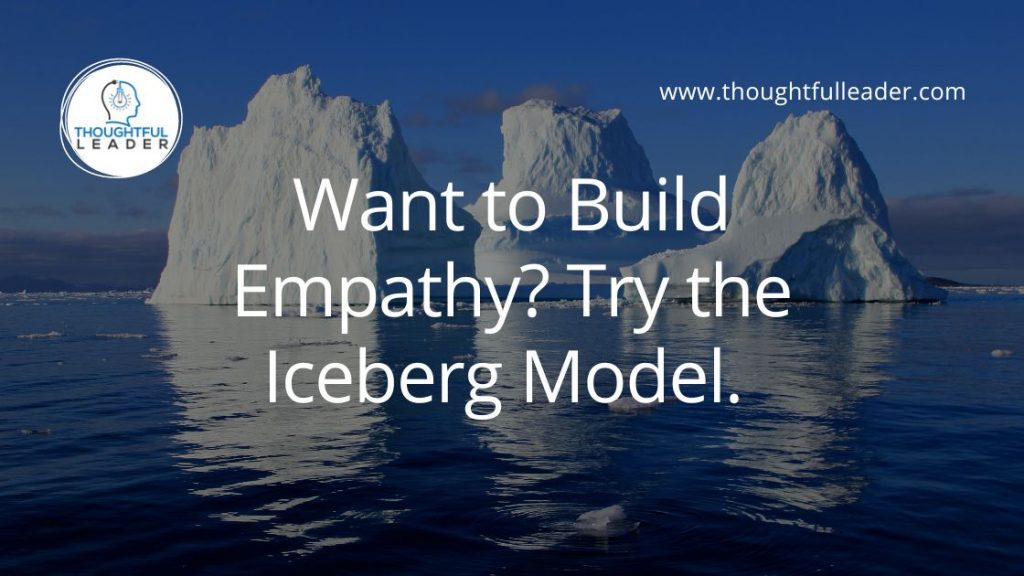 Leadership can be challenging and frustrating, especially if your team aren’t quite doing what you want them to. If you can build empathy for your people, you’ll have a better chance of remaining calm and patient with them!

That’s why in this post, I want to introduce a model which can help us to build empathy.

Like always, I like to keep it simple, and I’ll bet you’ve come across it in different forms across your career and life already.

Why Should Leaders Build Empathy?

The definition of empathy I’d like to use here is that of “cognitive empathy” or “perspective taking”, as described in this article in UC Berkeley’s Greater Good Magazine.

Essentially this means being able to identify and understand other people’s emotions. For leaders, empathy is a very handy thing to have.

Empathy can help leaders to:

In my opinion, these are all compelling points, encouraging leaders to build empathy, especially if they aim to lead a cohesive team.

Use the Simple Iceberg Model to Help You Build Empathy

The iceberg model is not a model where you punch in numbers and get an answer. In fact, it’s much simpler than that!

I like to use this model as a simple metaphor during training courses or coaching. It is particularly useful when discussing topics like having difficult conversations or managing behaviour or performance problems in a team.

This concept tends to resonate with people.

People know what an iceberg is, and that we can generally only see the tip of the iceberg above the water. Below the water is more iceberg, but we don’t usually know how much or what it looks like. 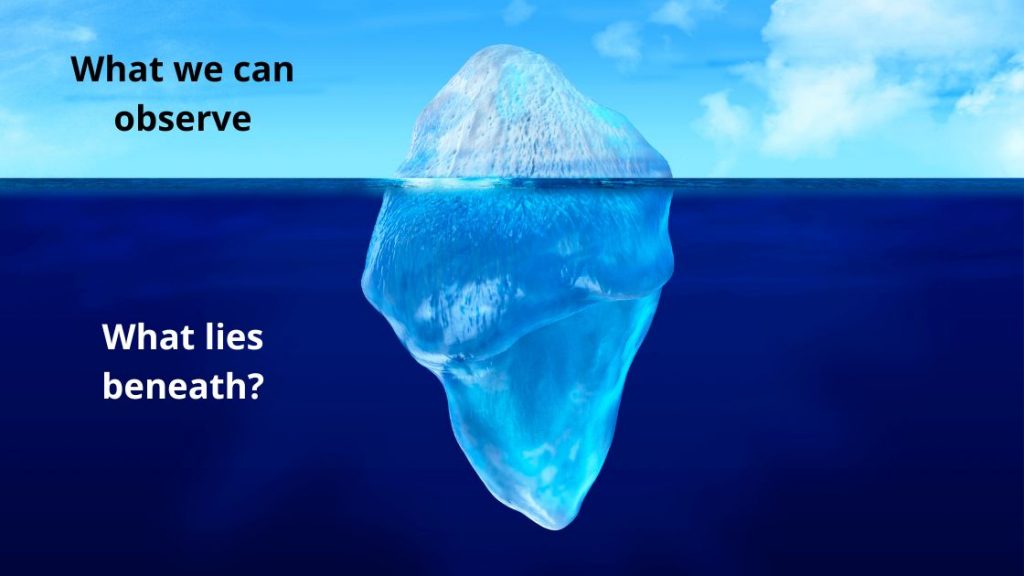 Where Does the Iceberg Model Come From?

There are a few different origins of the iceberg model floating around.

One origin comes from anthropologist Edward T. Hall, who wrote about “visible and invisible cultures” in the book Beyond Culture. He doesn’t appear to call it an iceberg directly, but many have extrapolated that meaning from his work.

Neurologist Sigmund Freud also refers to the Iceberg Model of Human Consciousness, where there is the preconscious, conscious and unconscious mind, with our conscious behaviour representing only about 10% of our whole psyche.

Then there is author Ernest Hemingway’s iceberg theory (or theory of omission) in fiction writing, which refers to what is written on the page only being part of the story behind a characters’ actions in a novel.

As you can see, there are a few different cited sources for this type of model.

The simple point I’d like to get across here is that we can observe what is at the tip of the iceberg, above the waterline.

But there is a whole lot of hidden stuff going on beneath the surface which drive what may be going on above the water.

How Does This Model Help Us to Build Empathy?

As a leader, it’s good to have an appreciation of other points of view – other perspectives.

If we are stuck only on what we are feeling or thinking, we’ll have a tendency to take a “my way or the highway” approach. We may also overlook good ideas from other sources, or ignore people’s feelings in the workplace.

I like to use this model to demonstrate that what we see above the waterline is only part of the story when it comes to how your people are behaving.

So what else is there beneath the surface?

At the tip of the iceberg, we see what people do, what they say and the body language they show. 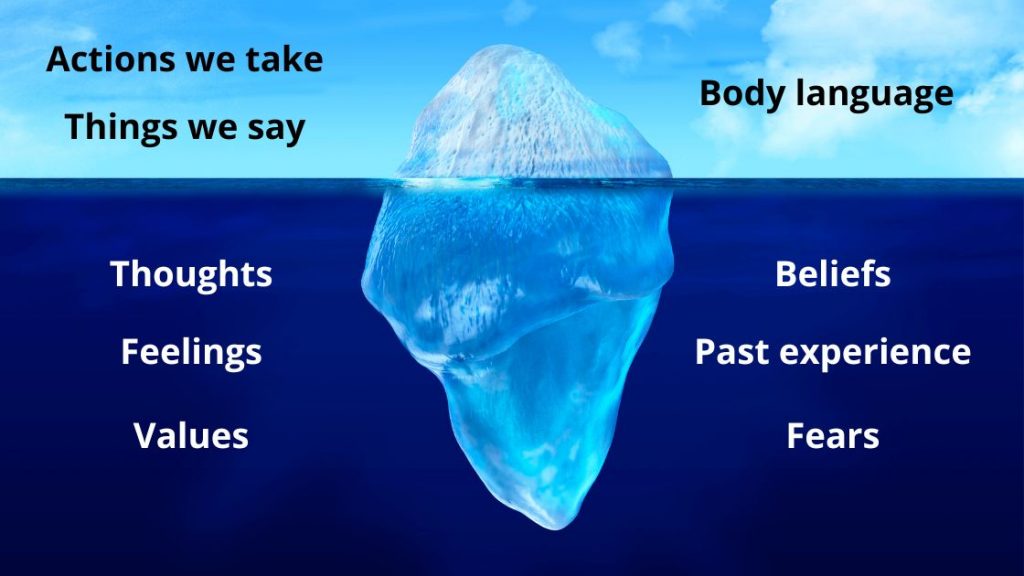 Beneath the waterline, however, there is much more going on.

We can’t see what people are thinking, feeling, what they believe or what they fear.

We don’t necessarily know what past experiences a person has had or the values that they hold dear just by looking at them. These are all strong drivers behind a person’s behaviour.

Keeping this in mind helps us to be more open-minded about what’s happening in the workplace.

Instead of rushing straight to judgement about somebody’s behaviour, it can be helpful to be curious, instead. This might mean asking yourself, “I wonder what’s behind that person’s behaviour?”

Learn More:  Why You Need to Know Your Values In Leadership.

Keeping An Open Mind Helps to Reduce Your Own Emotional Response

When we are able to keep an open mind, we are more likely to be open to alternative explanations.

The use of alternative explanations or cognitive restructuring comes from Cognitive Behavioural Therapy.

Put simply, it involves considering alternative explanations for an event that has occurred, rather than simply jumping to an automatic thought.

For example, your team member comes late to work. Automatically, you may think they are lazy, forgetful or not committed.

However, if we pause to consider alternative explanations, it may be possible that: 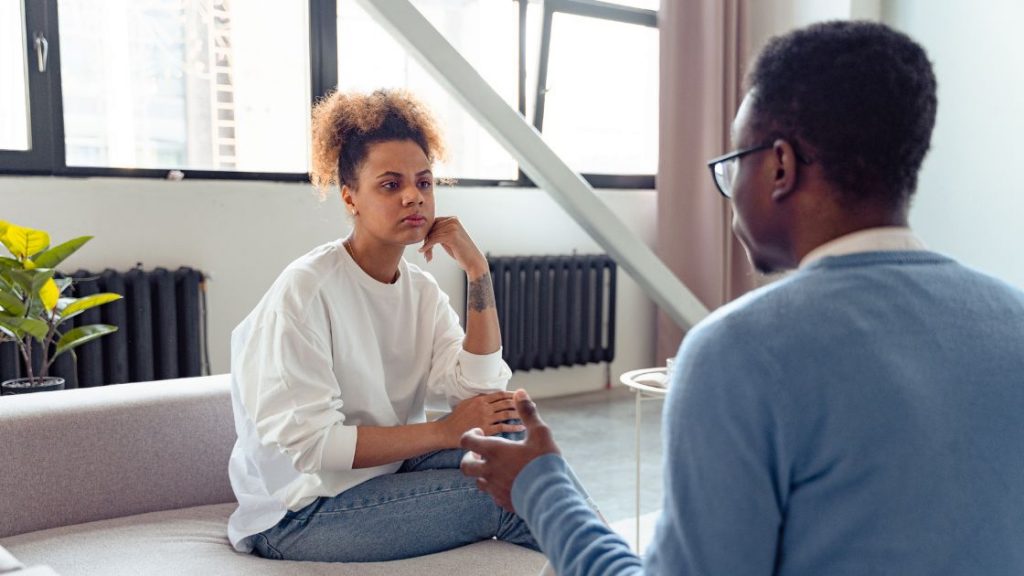 The point here is not to correctly guess what has happened. Rather, it is simply to open yourself to the possibilities.

This type of reframing can reduce the magnitude of our own emotional response.

In turn, this helps us to manage our emotions, remain calm and composed and hopefully guide a more constructive response, rather than one based on very strong emotion.

The iceberg model can help us more easily consider alternative explanations, increasing our empathy in the moment.

Learn More:  How to Manage Your Emotions For Better Leadership.

Warning: This Doesn’t Mean You Need to Put Up With Bad Behaviour

It’s important to note that just because you have empathy and are considering the other person’s perspective, it doesn’t mean you need to stand by and accept poor behaviour.

The reasoning behind the alternative explanations technique above is to help you manage your own emotional response. But it is not about letting people walk all over you or ignoring dysfunctional behaviour.

Similarly, just because you have empathy, does not mean you need to go overboard trying to satisfy your team members’ needs.

Leadership is not about always being the nice girl or guy. Sometimes, you will need to deliver difficult messages to people who need to hear them. This can still be done respectfully, however, and empathy will help you to do that.

Consider What’s Happening For Your People Beneath the Waterline

Of course, there are ways to understand more about what is going on for your people under the waterline.

We can have a conversation, we can discuss core values and past experiences that may be shaping their perceptions and behaviour.

There are unlimited examples of factors that may be at play. Someone may come from a cultural background that makes them hesitant to question leadership or speak up in meetings.

Or perhaps one of your team members has had a horrible boss in the past, meaning they are fearful of leaders right now.

Whatever the case, it can be useful for leaders to think of the iceberg as a way to open your mind to the possibilities and build empathy for your people.

What do you think about the iceberg model? Do you think it’s a useful concept to build empathy? Why or why not? Let me and all the other thoughtful leaders know in the comments below!