Got a Bad Employee? They Might Be in the Wrong Role.

Within any team, it’s important that the team members have the right roles. Often, certain roles lend themselves to different types of people. You might think you have a bad employee, but that might not be the case. 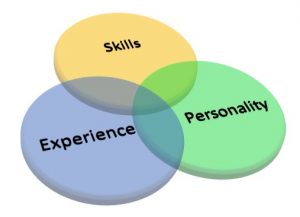 To prevent your people from landing in the wrong role, you need to ensure that three characteristics are aligned.

You need alignment between the person’s skills, personality and experience to ensure a good fit.

Without these three factors in alignment, you will begin to see issues emerge. The degree to which these issues appear will be dependent on just how out of alignment these factors are, with the role at hand.

A bad employee? Or someone in the wrong role?

If someone is in the wrong role, it will eventually become clear. However, if you can spot the warning signs early, you may be able to course-correct before it’s too late. This isn’t a situation that you want to endure for too long.

It is a mistake to assume that everyone can work in any role. Some people may just not be capable, don’t have the right mentality or aren’t experienced enough to take certain roles on.

When work takes too long to complete and has problems when it does arrive, you may have a person in the wrong role.

Work taking too long can signal that the person is not comfortable with completing the task (a skill or experience mismatch). Delayed work may also be caused by procrastination because the team member isn’t interested or doesn’t understand the value of the work (a personality mismatch). Work avoidance can also occur if a person feels that the tasks are beneath them (an experience mismatch).

2. Other team members are picking up the slack

You may have someone in the wrong role if other people in the team take on work that isn’t theirs. This occurs when something needs to happen, but other team members have decided they can’t rely on your bad employee.

As such, other team members complete the work, solving their immediate problem. Of course, this creates other problems where some of the team will be doing too much work to make up for others.

Related: Effective Ways Leaders Can Fix Frustration in the Workplace.

Rising frustration levels within the team can also be a sign that someone is in the wrong role. This frustration will originate from several places:

How to solve the issue of someone in the wrong role

There are several ways to go about addressing this issue. Some of them have a happy ending, whilst others do not.

Sometimes all you need to do is ensure the team member is trained to perform their tasks effectively. Addressing the skill mismatch will hopefully improve the alignment of the person with the role.

However, if you train the team member for a prolonged period with very little benefit, further training is not likely to fix the issue.

2. Partner your bad employee with a more experienced person

Coaching and mentoring can improve the performance and skills, if undertaken with a person who is experienced in the role and works to a high quality. However, you can’t do this indefinitely, because it takes double the resources.

If someone is in the wrong role, maybe you should change it. Suit the role to their skills, personality and experience instead of persisting with the current situation.

If you do this, you may also need to formally reconfigure the roles in the whole team. Otherwise, there will still be people doing work that they are not recognised for. This will continue to cause frustration for the team until it is resolved.

4. Move the bad employee on

If you are not seeing any improvements from the bad employee in their role, it is time to move them on. It may be that they can work better in a different role, somewhere else in the organisation. Whatever the outcome, you need them out of your team. Then you can bring someone in who can do the job properly.

I don’t usually write much about letting go of people, but you need to understand what impact this person’s presence is having to the rest of your team. People who are in the wrong role cause frustration and overwork for others in the team.

Catering for the shortcomings of somebody in the wrong role can have large consequences which may reduce the happiness of the rest of your team.

Make sure you assess whether you have a bad employee, or just somebody in the wrong role. Wrong roles can be solved, while bad employees may be better out of your team.

Have you experienced a situation where someone was in the wrong role? What happened and how was it resolved? Leave a comment below!